In the rainy season, the local people believe that the God would hear the entreaties that they create or "Bang Fai" to send (HUGE versions of your standard garden rocket!) to heaven and bless them with plentiful rain for rice cultivation. So, the celebration is entirely to the God of rain. On the festival day, the beautiful rockets in different styles are paraded to the launch site.

The local people dress in colourful traditional costumes and dance to accompany the procession. The highlight of the festival is the launch time. The rockets are fired from their launch platforms one by one. Noisy folk music and cheers can be heard for each liftoff and the rocket that reaches the greatest height is declared the winner 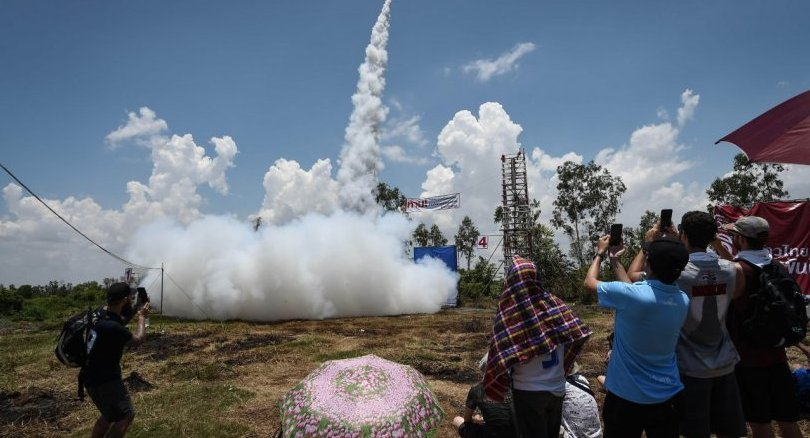 In the Northeast they simply time the rocket until it stops firing; assuming the longer the burn, the higher altitude reached. In the North altitude not as important as flight path: straightest plume of smoke wins. It's absolute bedlam, everyone's been on the beer (or LaoKaow, Rice Whisky 45% alcohol), annhialated, ciggies glued to their lip, ramming gunpowder into various dimensions of blue plastic drainpipe... It's bloody WONDERFUL!! No way would The Fun Police ever consider allowing such madness! Pre-Teen kids are wandering around firing garden rockets at each other, laughing (remember we used to do that? It's quite safe within reason), 90% of them being used to open cooking fires, fireworks are ALWAYS available here consequently experience, not protection is the name of the game. As it should be.

maxresdefault3
mixing explosives & alcohol, what could possibly go wrong!
From / per person