We begin with "Bathing the Buddha" or Um Phra Dam Nam ceremony: held each September in Petchabun Province in honor of a Buddha statue called Phra Buddha Mahadhamaracha. It all began when the statue, cast in the ornamental Lop Buri style, was found in the Pasak River by a group of farmers around four hundred years ago and was taken to be housed in Wat Trai Phum. According to local legend, the Buddha statue has twice disappeared from the temple only to be discovered again in the water. Consequently, a water oriented Buddhist holiday pays homage to the mystical image of the Buddha. 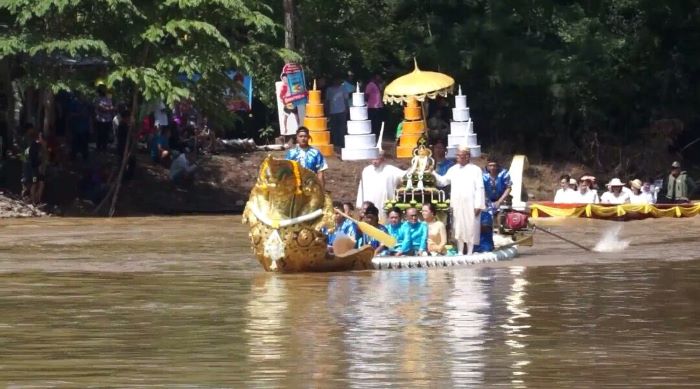 So if the legends are true, if you don't take him for a dip he'll take himself anyway?

The ceremony starts at 1 p.m. when the Buddha statue is carried around town and put under a tent in Wat Trai Phum, where Buddhists can pay respect to the image and stick gold leaf to the body of the Buddha statue. In the evening, prayers are chanted and there are various kinds of entertainment. The next morning, people make merit by donating food and other necessities to the temple’s resident monks. The Buddha statue is then taken to be immersed in the Pasak River by the local governor of Phetchabun in the belief that this act brings happiness and fertility to the province.

Onto the Main Event!

Traditional dances are then performed to show respect to the Buddha statue.After the ceremony, the water in the river is regarded as sacred. As a result, people swim in it or take the water to drink before a festive boat racing begins. Obviously the home advantage & sacred waters aren't considered biased at all...